Your first year as a private equity CEO can be the biggest culture shock of your career, recalls Titus Sharpe – Founder, former CEO and member of our Entrepreneurs Panel.

Looking back on my first private equity deal, I was deeply sceptical and didn’t want to do it. I didn’t want to open up to external shareholders or anything to do with other decision-makers.

But I did it out of respect for one of my other Co-Founders. He had a situation where he’d sold a business before. It was bought by a listed company but crashed in 2008. He was quite scarred by this, and was desperate to see a reward for the effort we’d put into the first five years of MVF.

What I didn’t know was what a culture shock it would be, and how many challenges I would face in that first year. Now, of course, I am a big fan of private equity. I understand how it helps you structure and grow your organisation in such a way to get a better outcome at the end.

These are three things I struggled with most as a first-time private equity CEO – but now really value.

As CEO, I found it hard adjusting to life with other people who now had a say in the business. I think if you’ve been venture backed, it’s easier to understand what happens when you get private equity on board. You’re used to having external shareholders.

But we were always bootstrapped. So going from a close-knit environment where four of us called the shots, to the intrusion of other people who’d come from a far more risk-averse environment, was a real shift.

The decision making process became slower, and we didn’t always agree, which could be frustrating at times. I sometimes found it annoying when I didn’t feel they saw our vision.

Looking back on it now, they were usually healthy discussions. I’ve since learnt to take on board private equity’s input, especially when it comes to acquisitions, property and recruitment. More on that later.

Obsession over perception and KPIs

The other thing I found hard was private equity was very perception driven, and we weren’t at all. We were more focused on cracking on with the business.

I knew what was important to my business. But I didn’t get what other people found important generally about businesses, that maybe I had previously overlooked.

A figure like percentage margin I also thought was irrelevant. I felt it was the total that was important. If I could make £10 million a year at 10% that was better than making £8 million at 20%.

Now though, I understand why private equity is obsessed by that percentage margin. It shows how efficient the business is. It’s important to continually obsess about this to make improvements on that margin percentage, of course, while growing the overall total margin.

It’s a complex topic. But by getting under the skin of it, we were able to make massive improvements to the business, which we otherwise might not have made.

It can be a learning curve, but private equity also brings to the table a wealth of insights and expertise.

On mergers and acquisitions, our private equity firm has been incredibly useful: in terms of how we approach deals, how we approach other entrepreneurs, how we structure deals, and what to be cautious of. They made us dig deep into the businesses we were acquiring, whereas we might not have been quite so analytical ourselves.

Before private equity, we also had a tendency to hire the best person we knew in our network. We had a strong industry network so we often thought, “who would be good for this role that we know?”, rather than doing an exhaustive search. I think culturally, that also comes from having been bootstrapped.

But private equity pushed us to do exhaustive searches, to look for the best people we could find, rather than just always relying on your network. We have since hired some amazing people, but we just didn’t have that mindset before.

And, I have to admit, I wish we had listened to private equity when it came to property decisions. We really shot ourselves in the foot by incurring more expense than we should have been exposed to. That was our own fault thinking we knew better – but we didn’t.

For any CEOs about to embark on private equity for the first time, it’s important to speak to other entrepreneurs that have been through it.

If you can gain an understanding of their experience, you’ll have a better idea of what you’re going into and what the experience is going to be like. I wish I’d done more of that before I did the deal!

Retrospectively, as more of a non-exec shareholder now, I really value private equity input. I know they’re driving long term value. But as a bootstrapped CEO, you think, “why are you making me focus on these figures”, that just didn’t make sense at the time. I just couldn’t get it.

But now I do – and I’ve come to really appreciate it. 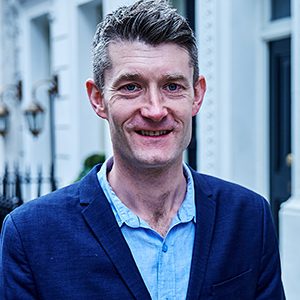 A tech entrepreneur, who has founded and sold four successful businesses, Titus offers growth experience and perspective grounded in values-based culture and scalable customer acquisition strategies. Titus has worked with Tenzing as a member of our Entrepreneurs Panel since we launched in 2016.

How do trade buyers differ from private equity investors?